Hej! It’s been long since I used this blog. From today on, the “How to orienteer” info card is available for download (PDF 930KB) from the following URL:

http://bit.ly/HOWTOORIENTEER (opens in a new window)

You can download and use the file for free in private and where the activity is not charged. In which case the Creative Commons Attribution-NonCommercial-ShareAlike 4.0 International License applies: (please quote Raphael Mak as author)

You must pay a license fee for its use if you are using it at a charged activity. Charged activity includes but is not limited to: public courses, training, competitions, books, magazines.

The license fee is:

Please inquire through either of the above emails if you need. Happy orienteering!

Now the freshly new website of raphaelmak.com is up and ready. Come have a look and don’t forget to stream/buy/order a few songs, pieces, albums and gigs!

The domain http://www.raphaelmak.com is being transferred to another host, so strange things may occur to this website during this week, including that the domain is temporarily not usable. Please be patient.

Meanwhile, check out my offer to write music here on Fiverr, and spread the word!

Everything written in this proposal are purely of my own personal opinion and not related to, or sanctioned by, any other club or organisation. Discussion is welcome and any coincidental or intended adoption of the proposal is even more welcome. In any case, this proposal is purely motivated by a desire to improve the state of school orienteering in Hong Kong, and above all, I do not deserve to gain the enmity of anyone because of this proposal.

Problems are observed with the current interschool competitions. Nowadays, these competitions are often poorly designed and organised, and congested with competitors, which affects the fairness and legitimacy of these competitions. Moreover, elite schools are able to field large teams, thus taking the bulk of the rank points and scooping up most of the prizes, while schools with a few high-performance orienteers have little chance to challenge a prize. The interschool system thus needs a overhaul to save it from being a mere showdown between a few schools, or worse, a farce. The system also needs to steer away from the focus on forest orienteering, and promote other formats and disciplines, in order to foster the development of holistic orienteers.

Due to the huge undertaking involved in the making of the new system, new organisational arrangements are needed. Three options are presented here:

A solution would be to expand membership to all school clubs affiliated/associated with OAHK, with one representative from each club sitting in the group. However, a constitutional (M&A) amendment will be required on the part of OAHK.

In this option, the School Orienteering Group will be devolved to a new affiliated club, with a name similar to the present Joint School Orienteering Association. The new club shall be tasked with (and only with) coordinating and organising all events in the new Interschool system. Each school club affiliated/associated with OAHK shall send in one student member and/or one teacher/coach member (i.e. one or two representatives) to the club board, failure of which the school shall not be allowed to join any interschool orienteering competitions. Members of the club board shall act as Persons-In-Charge (PICs) of the events.

The new club shall have a special status in that all OAHK-sanctioned interschool events will be, and only be, entrusted to this club. This is similar to a public organisation owned by the government but ran as a limited company.

As an affiliated club of OAHK, the new club may send one representative to sit in OAHK council meetings and participate in other committees of OAHK.

Each school wishing to join any events in the interschool system are required to send in at least one student, teacher or coach as helper(s) in those event(s). Failure to do so will lead to a ban from participation.

This option is advantageous in that it is the closest to the HKSSF’s system of convenors and committees for all of its sports. In addition, event organisation manpower can be trained among schools.

The fate of the original School Orienteering Group may be subject to one of the following sub-options:

Under this option, all affiliated and associated clubs of OAHK will be eligible to apply for co-organisation of any interschool event, subject to a programme and schedule decided by the School Orienteering Group. The School Orienteering Group is retained as-is, and shall be responsible for accepting co-organisation applications (“bids”) from clubs, for deciding the programme and schedule of the interschool events, and for codifying the rules and regulations of the interschool events to be implemented by the co-organising clubs. This option is the most laissez-faire and involves the least administrative hassle, yet contradicts the spirit of interschool sports as mutual decision making by participating schools, and while closer to the current OAHK system of event organisation, is too far removed from the HKSSF system.

Having considered the details of the options above, Option 2B (coterminous School Orienteering Group – interschool club board arrangement) is the most feasible while meeting the spirit of interschool sports and achieving the objectives of the new system.

[3] The Sprint Relay will be of a gender-separate nature with all men’s and all women’s teams, different to the IOF standard which is a mixed gender relay. Rationale: difficulties to unisex schools if mixed gender relay adopted.

[4] Trail-O Relay: one Pre-O course and one TempO course. Each of the 3 team members, in turns, completes exactly 1/3 (one third) of the Pre-O course in any order. Each of them will then complete one or two TempO stations each, with 4 tasks at each station.

Raphael Mak’s op. 1 through 17 are now available on Sheet Music Plus. All scores are published under the name of VicMusic.

The second stage of the Stockholm Indoor Cup takes places in a school nearer to the city centre, Globala gymnasiet, just a few stations from the central station on the T-bana.

This stage of the event stands out in having the competition take place not only in the main building but also in two separate buildings, linked by passages marked with carpets on-site and blue areas on the map. While it was a few minus degrees outdoors, the indoor environment then becomes hot and humid by comparison which affected thinking due to insufficient oxygen.

For both stages, description sheets are available separately and not printed on the map. Start time band, at one hour intervals, is chosen during online event entry and start draw is done within each start time band.

A key to rapid route planning is to realise the loops that the one-way passages form (e.g. between staircases A and B on 2/F and 3/F). Compared to yesterday, however, there are not as many instances of a corridor divided into two sides with different linkages. One feature of today is the labyrinth set within the gymnastics hall (controls 14 to 18). 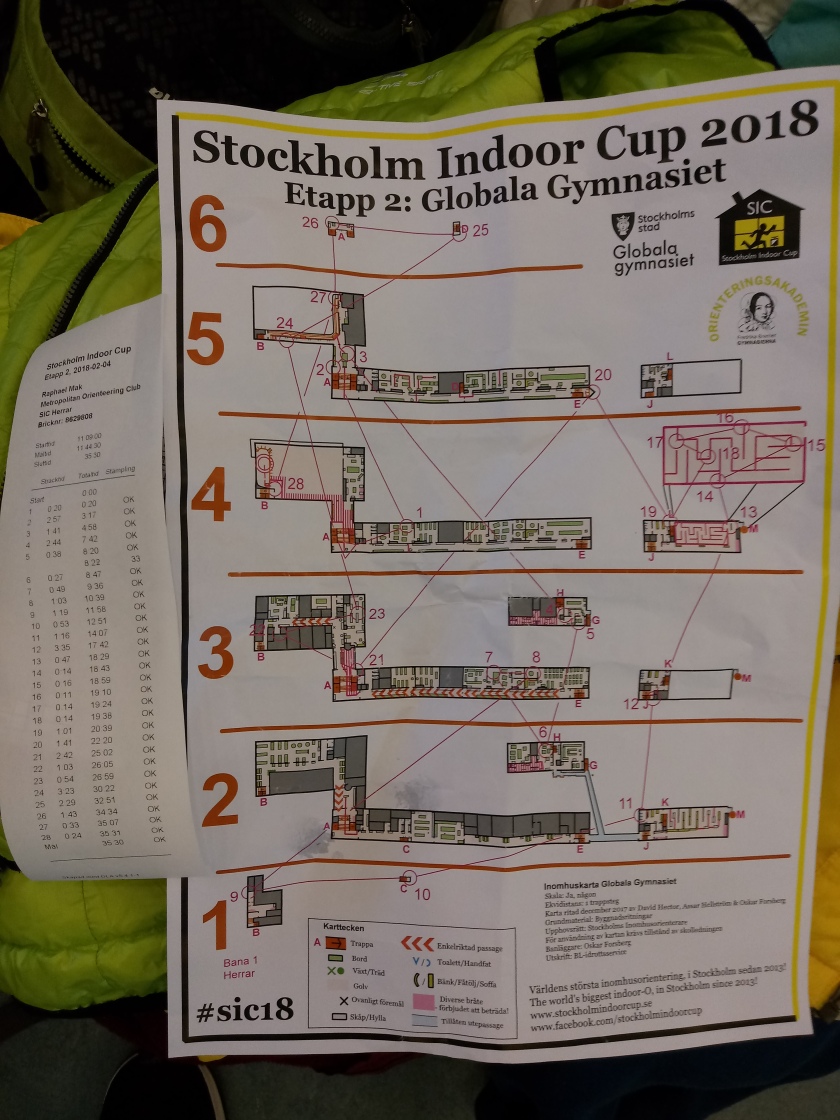 The only control marker on-site is the start marker as in the photo below. Note that the marker is of a special rainbow design by SOFT (Svenska Orienteringsförbundet), probably in support of LGBT rights and if I remember correctly, debuted around the time of Stockholm Pride either this year or last year. The left lane is the start passage and the right lane is the competition area; they are NOT mutually passable at the location of the marker.

And all the other controls have no markers, which makes them a lot harder to see:

The start area (appears to be the art room):

The outdoor passage: one must only run on the green carpets to ensure the shoes do not touch the snow and make the indoor areas wet; the rule to have separate indoor shoes for the competition has a similar intention. 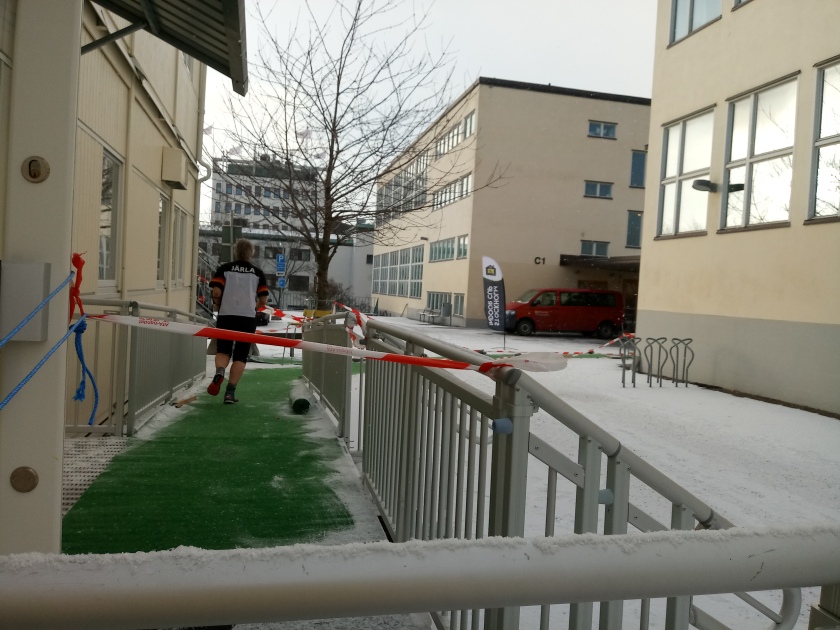 A one way lane has arrows, complete with enkelriktat (one way) and the no-entry sign you see on roads:

The finish (mål). Note that there’s a live broadcast of the gymnastics hall (a separate one downstairs of the one with the labyrinth). 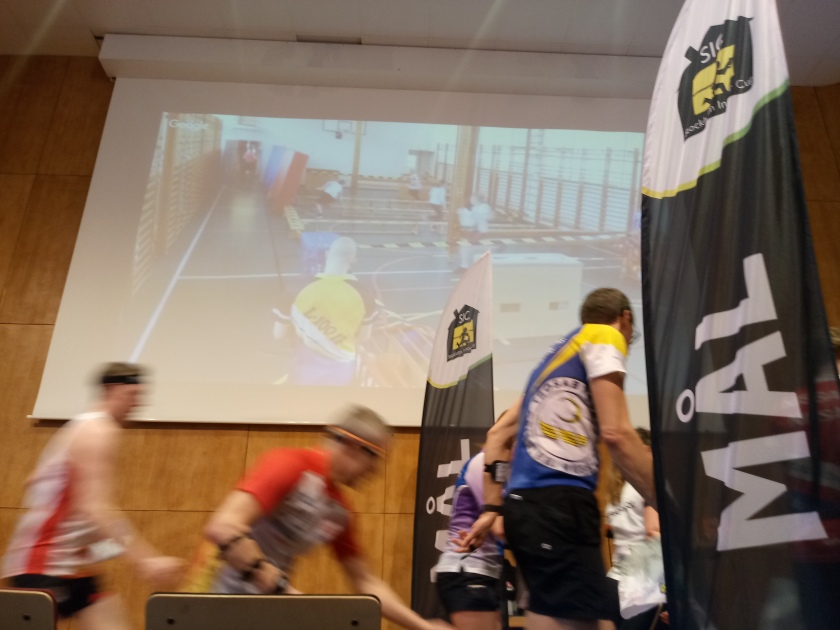 People mountain people sea (for those who don’t understand, it’s a calque from Chinese). The balcony is part of the competition area; there’s actually a control to the side of the pipe organ’s manual (very impressive for a high school to have a pipe organ). 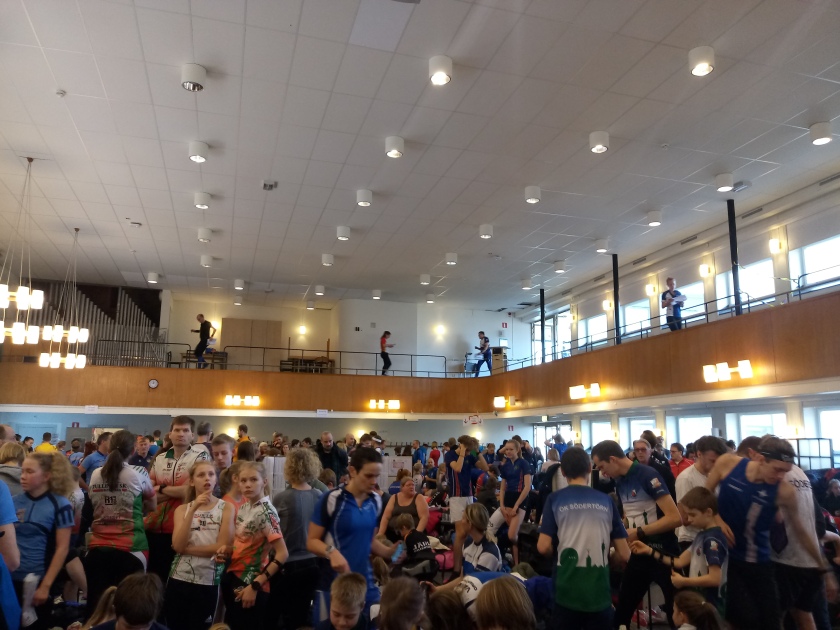 The canteen seems to be part of the competition area, so the organisers are selling food and drinks themselves: 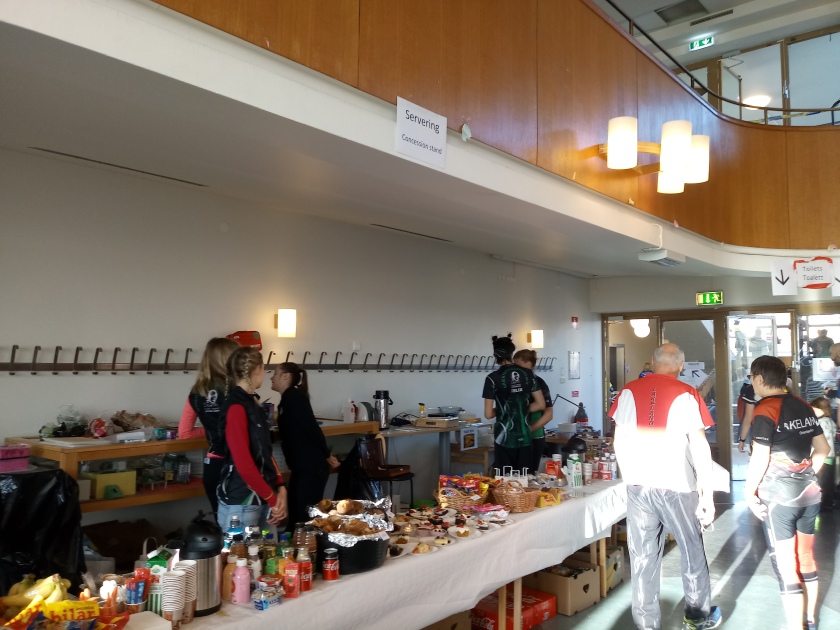 From time to time, the captioned competition turns up in orienteering websites and discussions. Yes, this is the Stockholm Indoor Cup, which has inspired orienteers around the world to organise similar events.

The competition usually takes place in a school: (note that in many Germanic languages the term gymnasium refers to a high school)

A few rules need to be observed:

Note that this school has the main entrance on 2/F. (1/F being the “basement” that is level with the ground outside)

The following is an illustration of how controls 3 to 4 can be tackled, using staircases L->K->E->G. (I lost upwards of 5 minutes on this leg, taking two full loops to get out of the error) 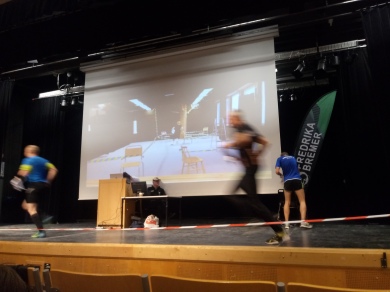 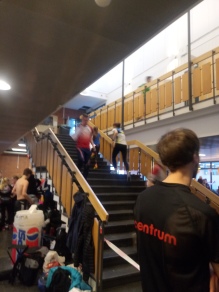 To be continued tomorrow (day 2).

“How to orienteer” info card

BREAKING! Round The Island Again in Hong Kong 20 July 2018

Round The Island: Tickets at URBTIX